After paying taxes, what’s left of a consumer’s income is disposable income (Yd = Y-T). There are only two things a consumer can do with their income; spend (consume) or save.  As a result, Disposable Income (Yd) will be equal to consumption (C) plus savings (S); Yd=C+S.​​ 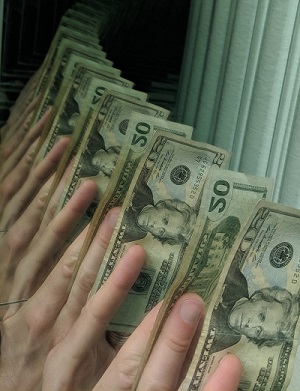 What is the spending multiplier?

An economy’s MPC and MPS have implications for the overall economy. New spending multiplies through the economy and has a larger impact on Gross Domestic Product (GDP). This spending could take the form of a new investment from businesses, new spending from consumers or the government, or new sales of exports. Any of this new spending would multiply through the economy.
As an example, let’s assume every citizen in the fictitious nation Tanterra has an MPC of .8 and an MPS of .2. If the government purchases the services of a police officer for $1000, GDP has just increased by $1000. The police officer will now spend 80% and save 20% of the $1000 of new income. The officer purchases a plane ticket to Hawaii for $800 (while saving $200). The owner of the airline now has $800 of new income. They spend $640 on a new computer for the office and save $160. The owner of the computer store now spends $512 on an advertisement on a local billboard while saving $128. So far, the original increase in government spending has increased GDP by more than just $1000. There has been an additional increase in GDP of $1952 ($800+$640+$512). The $512 received by the billboard owner will continue to be spent and saved at a ratio of 80/20.

What is the tax multiplier?

Just as changes in spending multiply through the economy to have a larger impact on GDP, the impacts of changes in taxes on GDP are also magnified. The formula for the tax multiplier is MPC/MPS. For the example above the tax multiplier in Tanterra would be 4 (.8/.2). If the police officer was given a tax rebate of $1000 instead of being hired by the government, that tax rebate would have multiplied through the economy just as the spending increase did.  The difference is, the reduction in taxes would only increase GDP by a maximum of $4000 (4 x $1000).

Note: Changes in taxes have an inverse relationship to their impact on GDP. Increases in taxes decrease GDP and decreases in taxes increase GDP. You could see the tax multiplier expressed as a negative number as a result.

Why is the tax multiplier lower than the spending multiplier?

Spending changes have a bigger impact on GDP than tax changes do. That is because when there is a change in spending, that initial change impacts GDP directly. Changes in taxes, on the other hand, do not initially change GDP. In the first example above, the government increases spending by purchasing the services of a police officer. That initial $1000 purchase increases GDP by $1000 immediately (plus $4000 of spending as it multiplies through the economy). In the tax decrease example, the actions of the government do not immediately change GDP; it is only the subsequent spending that boosts GDP. As a result, the tax multiplier is always 1 less than the spending multiplier.

What is the balanced budget multiplier?

Due to the difference between the spending and tax multipliers, it is possible for the government to change GDP without increasing or decreasing the deficit. The balanced budget multiplier is always 1. Increasing taxes to pay for a spending increase of an equal amount will increase GDP by a factor of 1. Decreasing spending to pay for a tax decrease of an equal amount will decrease GDP by a factor of 1.
If the government of Tanterra increased taxes by $1000 and increased spending by $1000, the budget would be balanced (it wouldn’t change the deficit), and it would increase GDP by a maximum of $1000. Decreasing taxes and spending both by $1000 would decrease GDP by a maximum of $1000.

Why will the actual change in GDP be less than the maximum indicated by the spending and tax multipliers?

How do the multipliers impact AS/AD?