Absolute Advantage: is the ability of one entity to produce more of a good or service with fixed resources, or the same amount with fewer resources than another entity. For example, if Katrina can type 6 pages in an hour and Davis can type 8 pages in an hour, Davis has an absolute advantage in typing because he can produce more typed pages with an hour of labor than Katrina can. But if Katrina can mow a lawn in 15 minutes while it takes Davis 20 minutes to mow that same lawn, then Katrina has an absolute advantage in mowing lawns. That is because Katrina can mow a lawn using fewer resources (minutes of labor). Essentially the absolute advantage goes to the person or entity that is better at producing the good in question. Absolute advantage is a term you need to understand and remember, but it isn’t very helpful in determining how resources should be used.  To determine how resources should be used comparative advantage is needed.

Outputs:  Take a look at the two production possibilities curves. In this example David and William both like to bake. When looking at their respective PPC’s only the maximum levels of production are relevant (where the PPC hits both axes). William can cook 2 cakes or 4 pies in an afternoon. David can cook 4 cakes and 6 pies. With output questions the numbers provided are the quantities of finished products. Since the amount of time is fixed, this is an output question. 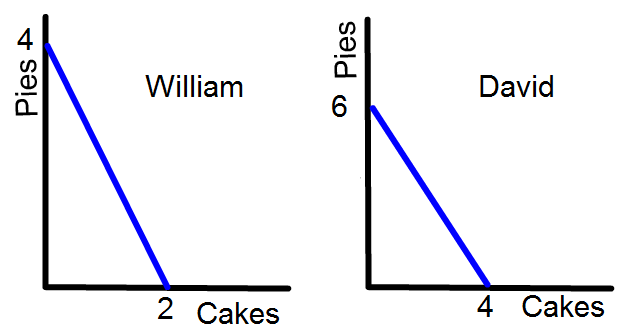 While David has the absolute advantage for both goods (he is able to produce more of both outputs), that fact isn’t relevant when determining comparative advantage. Determining comparative advantage requires calculating opportunity costs. When calculating opportunity costs with Outputs, use the “Other Over” formula (output and other both start with “O”).  The “Other Over” formula is:

Note: the numbers found in the PPC’s above could also be displayed in a chart as well. The method for displaying the numbers doesn’t change anything. The key to deciding if you should use the Other Over formula is determining if the numbers are outputs. Since cakes and pies are what come out of the production, these are outputs.

Inputs: Take a look at this new chart. Here the numbers have been switched to inputs. Instead of how many cakes and pies they could each make in an afternoon (pies and cakes are outputs), the numbers are minutes it takes each of them to produce 1 cake or 1 pie. Since minutes of labor are an input into the production of each product, a different formula is required. 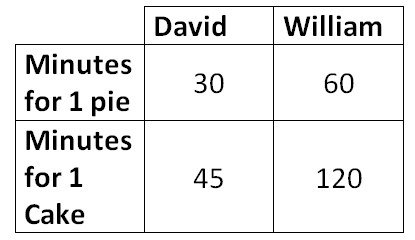 Based on these numbers, one can see David still has the absolute advantage for each good because he can produce pies and cakes with fewer inputs (fewer is better with inputs).  To calculate opportunity costs for comparative advantage when Inputs are given, use the “It Over” formula (input and it both start with “I”). The “It Over” formula is:

Terms of Trade: If William and David specialize in the the production of goods for which they have a comparative advantage, then trade, they could be able to exceed their own production possibilities (consume outside their own PPC curves).

Terms of trade is the rate at which one good could be traded for another. Terms of trade that benefit both entities will fall between each entities opportunity costs. In the example above William could produce 1 pie with an opportunity cost of 1/2 a cake and David can produce 1 pie with an opportunity cost of 2/3 of a cake.  If William and David specialize and trade, they will agree to trade 1 pie for between 1/2 and 2/3 of a cake. Likewise, they will trade a cake for between 1 1/2 pies and 2 pies.

If the terms of trade fall outside the relative opportunity costs, one entity will benefit while the other will not. If 1 cake traded for 3 pies, for example, that would benefit David because he would have to give up 2 cakes if he wanted to make 3 pies himself (3 times his opportunity cost of 2/3 cakes), so only giving up 1 cake is good for him. These terms would however hurt William because he can make 1 cake himself and only lose 2 pies (his opportunity cost for making 1 cake) so losing 3 pies to get a cake would not help him. As a result, William and David would not likely trade if 1 cake was worth 3 pies.