​The Business Cycle and Goals for the Economy 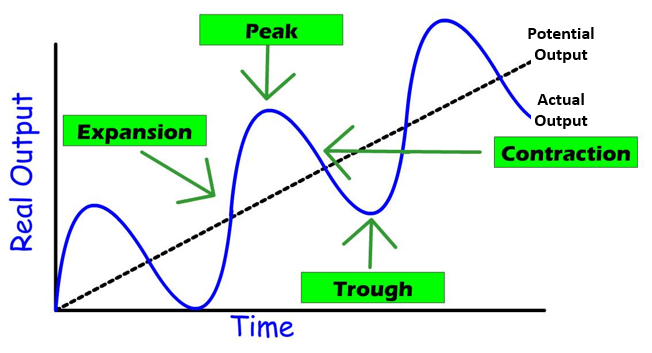 What are the 3 main goals for the economy?The main goals of the US economy are also found in the business cycle and when the government gets involved with fiscal policy or monetary policy (technically the Fed is quasi-government) it works to limit the effect of the business cycle and obtain the three macroeconomic goals. The first macroeconomic goal is full employment (4-6% unemployment). An expanding economy is likely to have more jobs and fewer workers unemployed. Unemployment tends to be lowest at the peaks and highest in the troughs. The second macroeconomic goal is stable prices (approximately 2% inflation). Inflation tends to be lowest in the troughs and highest at the peaks. The third and final goal is growth (2-3% real GDP annual increase). In AP macroeconomics growth doesn’t just mean more GDP; it means more potential GDP. So recovering from an economic downturn isn’t enough for growth. The overall trend-line should be upward sloping. True economic growth requires more resources, technology, and/or productivity.

What indications of the business cycle are there?
Leading indicators anticipate what direction the economy is heading in the future. They aren’t always accurate, but their predictive power makes them useful. The leading indicator most seen on the AP Macroeconomics exam is business inventories. Business inventories are the products that have been made, but not yet sold. A dramatic, unexpected increase in inventories is often a leading indicator of an impending economic downturn. That is because businesses are not selling all that is being produced and are likely to decrease production and employment moving forward.